Introduction to IP: the Internet Protocol

From routing to IP addressing, a look at the protocol that gives life to the Internet.

The TCP/IP protocol is a collection of protocols that determines how the Internet should work. The TCP/IP name comes from two of the most important protocols it contains: the Transmission Control Protocol (TCP) and the Internet Protocol (IP). In this article I want to investigate the latter.

The Internet Protocol is a set of rules that determine how data should travel across computers over a network and reach the correct destination. You can find the original document here published by the Internet Engineering Task Force (IETF), along with additional corrections and fixes (here, here and here). It is a low-level protocol, as it belongs to the Network layer in the TCP/IP protocol stack: 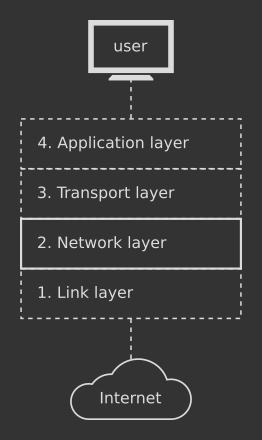 1. The Internet Protocol belongs to layer 2 of the TCP/IP protocol stack.

The two concepts above go hand in hand: let's take a deeper look.

Routing is the ability of a computer network to dispatch messages around, say from computer A to computer B. As seen in chapter #2 of this series, the Internet is a huge entity made by billions of computers connected together through cables: the Internet Protocol defines how a message should travel across those computers to reach its destination.

More precisely, the Internet is a global network made of several smaller networks, which in turn contain hosts. Routers are special computers located on the edges of those networks, acting like gatekeepers for packages that enter or exit. Routers do the hard work of picking up the message you want to send and move it in the right direction. The message is passed from one router to another until the destination (i.e. the host) is reached.

2. Two computers in different networks want to exchange information. White dots are routers. A message might need to traverse multiple networks (i.e. routers) in order to reach the destination.

The physical path between computer A and computer B is filled with routers. A package that needs to traverse one or more networks will inevitably pass through all the networks' routers and get redirected by them, until the target host is reached. The Internet Protocol describes how routers should do such redirection job as efficiently as possible.

In the picture above you can notice there is more than one way for a message to reach the destination. Routers are able to choose the shortest path, and also adjust it if the network is overloaded — in case many other computers are trying to exchange data at the same time — or if there is a network malfunction somewhere along the way.

Part of this magic is performed through routing tables, special databases stored into routers. Routing tables define the path a message should take to reach every destination that the router is responsible for. When a router receives a message, it parses it to understand its intended destination, then it determines where to route the message based on the information located in its routing tables.

Anatomy of a message: datagrams

A datagram is made of two parts:

I previously said that routers dispatch messages. They actually deal with datagrams: when a datagram arrives, the router parses the datagram header in order to understand where to route it. It then matches the destination address to its routing table and act accordingly: if the recipient belongs to its network, the router passes the datagram to that specific host, otherwise the datagram is forwarded to a different router in another network.

I will investigate all the fields a datagram header consists of in future chapters of this series, when I will get my hands dirty with network programming. For now it is interesting to note the presence of the Time-to-live (TTL) field (renamed Hop limit more recently) that determines how long a datagram should float around the Internet before being destroyed. When the datagram arrives at a router, the router decrements the TTL field by one unit. When the TTL field hits zero, the router discards the datagram. This is useful to prevent datagrams from going in circles forever on the Internet.

Different networks allow different datagram lengths, in bytes: some want short datagrams, some others allow the maximum size available (65,535 bytes). A fat datagram needs to be split up into smaller ones when it traverses a network that doesn't understand big datagrams. Such mechanism is called fragmentation and is supported by the Internet Protocol. A bunch of fields in the datagram header keep track of the number of sub-datagram a datagram has been split into and are used by the receiver to later reassemble the information.

The Internet Protocol is connectionless

Sending data in Internet Protocol is conceptually simple: generate a datagram, then pass it to a router that will address it where needed. Rinse and repeat for every datagram your message is made of. Also, no connection needs to be established in advance in order to talk to a router: just send it the datagram and you're done. For this reason the Internet Protocol is a form of connectionless communication.

In connectionless communication datagrams are sent without first ensuring that the recipient is available and ready to receive them: datagrams might arrive in a different order than expected. Or might not arrive at all, in case there are misconfigured or malfunctioning routers along the way. For this reason the Internet Protocol is almost never used directly, rather as a foundation for other protocols — for example the TCP + IP combo — where fancier connections are required. I will explore the improvements of the TCP protocol in the next chapter of this series.

When a datagram travels over the Internet, it contains in its header the IP addresses of both the source and the destination. Routers parse the datagram header, read those addresses and redirect the datagram accordingly.

The IP address seen above is known as IP version 4, or IPv4 for brevity. Since an IPv4 address is a 32-bit binary number (4 octets, [texi]4\times8 = 32[texi]), the maximum amount of unique IP addresses is [texi]2^{32}[texi] — around four billions. Apparently a big number, but not enough for the modern, ever-expanding Internet and the devices that every day want to connect to it.

Using the IPv6 format allows for [texi]2^{128}[texi] addresses, a number that is even difficult to imagine. The Internet infrastructure is slowly adopting the new IPv6 format, while it will still be possible to use existing IPv4 addresses for the foreseeable future due to backward compatibility.

How are IP addresses assigned?

Routers are responsible for assigning IP addresses to hosts that join their networks. When you connect your device to the Internet through your Internet Service Provider (ISP), one of the ISP routers assigns an IP address to your router, which can be seen as a host in the ISP network. Such IP address is visible from any part of the Internet and is called public address. At the same time, your router assigns another IP address to your device, visible only inside your local network. This IP address is called private address.

Imagine you live in France and want to send a letter to a friend in Italy through the physical mail service: while writing the address, you will add the string Italy to determine the country of destination. Such information will be used by the postal service to optimize the routing: there is no need to send your letter to Asia if it is addressed to Europe, after all. This will prevent your package from floating around the wrong offices or taking unnecessarily long routes, which would increase the delivery time.

The same logic applies to the Internet, which is seen by the Internet Protocol as a big hierarchical structure of networks and hosts. A network is like the country in a physical postal service, while the host is the street address. In computer's terms, the network is the portion of the Internet in which the device is located, while the host is the device itself within that network. This information is extremely useful to optimize how datagrams flow across Internet routers, as seen in the example above.

An IP address written in CIDR notation also tells you how many hosts can exist in a specific network. In the example above 33.96.187.2/24, 8 bits are reserved for the host identifier, which means up to [texi]2^{8} = 256[texi] hosts in that network.

You usually don't see IP addresses written in the CIDR notation because you don't need it as an Internet user. However, the CIDR-ed version is always passed to routers: they unpack the IP address as specified by the network mask, grab the network information and route the datagrams to the right location. Operating systems too need to know this information to determine if a datagram should be sent to other hosts on the same network or to the outside world.

The concept of network mask seen above exists to allow the creation of subnetworks, a practice known as subnetting. Subnetting is the process of splitting up a network into two or more networks. This is done physically by installing new routers to mark the boundaries of the new subnetworks, and logically on the IP address by using some bits from the host part as a new network prefix, as seen in the picture below:

Subnetting is done by network administrators to create new, smaller networks out of existing ones. The operation brings several benefits. For example, subnetting improves the network performances: when a network is subnetted, different devices communicate with different routers rather than having all devices connected to a central router, which might become busy. Subnetting also increases security and reliability: subnetworks are isolated, so a problem in a specific subnetwork won't propagate to others.

Where is the Internet Protocol implemented?

Many other protocols use the Internet Protocol as a foundation: the most important one is TCP as I have mentioned multiple times throughout this article. In the next episode of this series I want to explore such protocol from a theoretical point of view. Then I will get my hands dirty with network programming, to put in practice what we have found so far. Stay tuned!