“Is that thing still around?” — Homer Simpson

Welcome to the second chapter of the Networking 101 series. In the previous episode I had a quick glance at computer networks and how to classify them. Today I want to dig deeper into a specific subset of computer networks that you are probably already familiar with, called the Internet.

What is the Internet?

In Introduction to Computer Networks we saw how computer networks are very complex entities that vary in size, accessibility and technology. For example, the network inside your house is different from a network that connects two cities. In terms of size, structure, hardware and functionality. Such diversity makes it difficult for unrelated networks to play nicely together. And yet we are able to exchange emails, watch movies on our devices, chat with people all around the globe: how is that possible?

The solution lies in internetworks, or internets in short. An internetwork is just another type of network that connects multiple networks together and abstracts away their differences, so that they can communicate as if they were compatible in the first place.

There is one public internetwork on our planet called the Internet with the capital I. Anyone can access the Internet with a device — computer, phone, tablet, ... — and an Internet connection to exchange information and share resources. Let's begin the Internet exploration from the hardware side.

The Internet from a hardware point of view

The Internet is a complex creature that boils down to three physical components: cables, routers and networks. Technicians call Internet infrastructure the mix of Internet hardware and the software that runs on it.

The Internet is a huge ball of fiber-optic cables that connect multiple smaller networks together. Those cables carry information from one side to the other in the form of electric signals. The entire globe is covered by Internet cables, except for Antarctica: lots of them are placed underwater to cover huge distances. For example, the Atlantic Crossing 1 (AC-1) is a very long cable — 14,000 km — that links the United States with Europe. Or the Pacific Light Cable Network (PLCN) connecting Hong Kong, Taiwan, the Philippines and the US owned by Google and Facebook. The picture below shows a map of all the Internet cables as of today. 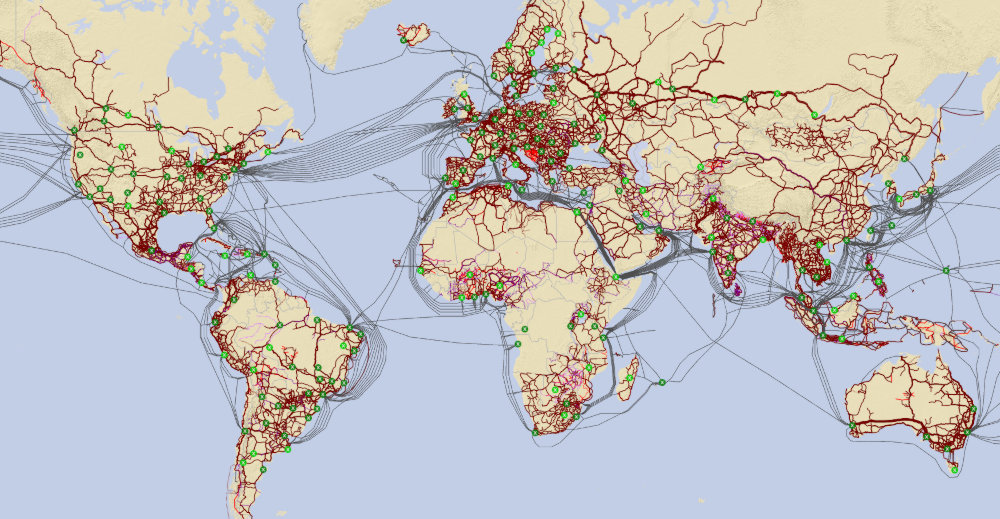 1. A map of all Internet cables on Earth. Courtesy of International Telecommunication Union (ITU). See the interactive map here.

Another important element of the Internet is the router, a special type of computer that forwards data between points. As sketched in the picture below, the Internet is a network made of links (cables) and nodes (routers). Routers are responsible for moving information from one point to another, so that a message sent from computer A reaches computer B as soon as possible and without errors.

In the picture below you can also see there is more than one way to reach the destination. Routers are able to choose the best path when the network is overloaded — in case many other computers are trying to exchange data at the same time — or if the shortest path is blocked by a network malfunction. This is an important property of the Internet and other networks that follow the same principle, called redundancy: alternate paths for restoring the functionality in the event of unplanned outages.

2. Device A wants to send a message to device B: the picture shows two possible paths that reach the destination. Dots are routers, lines are cables.

Last but not least: the Internet is made of networks, of course. For example, my tablet and my laptop are both connected to a local network inside my house, also known as Local Area Network (LAN). The tablet and the laptop can talk to eachother because they are part of the same network. However, I need the support of an Internet Service Provider (ISP) for the data to travel outside my house and communicate with other devices over the Internet. An ISP is a company that provides such Internet access and many other Internet-related services.

I will explore the technology behind ISPs in one of the next chapters of this series. For now let's dig a little bit deeper in the Internet infrastructure and how data flows from one end to another.

ISPs are conceptually organized into three layers, or tiers. At the bottom of the stack you get Tier 3 ISPs: small, regional providers that sell Internet connection to end users like you and me. They usually don't own the hardware required for the actual transmission, so Tier 3 ISPs purchase connectivity from ISPs on the upper level called Tier 2 ISPs. The act of buying network access from an upper tier is called transit.

Tier 2 ISPs are larger than Tier 3 ISPs and sometimes they also own cables and other network hardware. For example, Comcast in the United States and Vodafone in Europe are among the biggest Tier 2 ISPs in the world. Tier 2 ISPs usually talk to eachother in order to move data from one point to another — this is called peering. 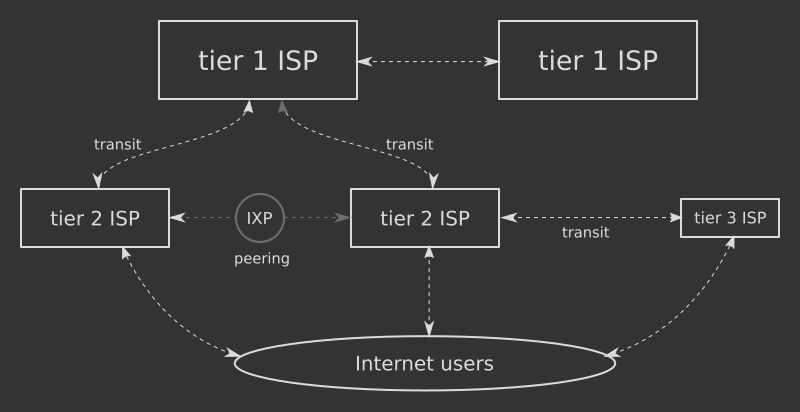 3. Example of multiple ISPs connected together through peering or transit.

The help of big Tier 1 ISPs is only required when data needs to travel long distances: if you want to connect two close cities, passing through a Tier 1 ISP would be a waste of money for the Tier 2 ISP and a waste of time for you, since the signal will take more time to be delivered. Peering is a way to shorten that distance and also cut the money required: peering is usually free between ISPs on the same tier.

The peering shortcut is possible thanks to Internet Exchange Points (IXPs): huge buildings filled with computers and routers that connect multiple ISPs together and help create shorter paths for Internet traffic. IXPs are located all around the world: there are roughly 240 IXPs across 180 different areas as of today. This page on datacentermap.com lists all IXPs on our planet along with their location on the map.

All in all, sending a message over the Internet means to push data across multiple ISPs and IXPs, their routers and their cables. The actual path is determined by the location of the recipient who will get the message and also often by commercial agreements between ISPs.

What about wireless devices?

So far I've only mentioned computers connected to the Internet through a physical cable. There are several other wireless connections out there that allow devices such as laptops, tablets, phones, smart TVs, cars, ... to get Internet access. The most popular ones are Wi-Fi, formally known as the IEEE 802.11 standard and the 5g mobile network.

Wi-Fi and 5g are based on different technologies and protocols that I will explore in future chapters of this series. Regardless, they just provide another way to get a signal from your device to the Internet provider: once the data has reached the ISP, everything is just regular Internet communication over fiber-optic cables as we have seen above.

Another emerging wireless technology is the satellite Internet access: Internet connectivity through satellites floating around the Earth. Extremely useful in those places where Internet cables are not available, satellite Internet provides high coverage and reliability. Nobody knows if the future of Internet is with satellites: as of today, cables can carry far more data at far less cost than satellites, so almost 100% of Internet data runs on fiber-optic cables.

Moving data around the Internet requires specific instructions: how to build cables, routers and computers, how to convert signals, how to write network software and so on. Such instructions are known as network protocols, sets of rules that determine how information should be transmitted between different computers so that they are able to understand each other.

The Open Systems Interconnection model (OSI model) is another way to describe how computer networks should work. The OSI model is more detailed than the Internet Protocol Suite, especially when it comes to hardware specifications. However, back in the days the protocols described by the OSI model were considered by many as too complicated and inefficient, so the OSI model remained a theoretical thing. The Internet Protocol Suite has become the standard for modern networking, yet it is based on many ideas originally drafted by the OSI model.

Who invented the Internet?

The Internet started as an experimental project founded by the United States Department of Defense in 1960. Computers were expensive and slow back then, so the idea was to share them in a network and distribute their processing power to multiple users at the same time — this is known as the Time Sharing technique.

Designed by the Advanced Research Projects Agency (ARPA), a research and development agency of the United States Department of Defense, the Internet precursor was called ARPANET in the beginning. The network initially was very small, connecting few research centers in the United States and was used only by scientists and technicians.

As technology advanced, other computer networks began to appear, also outside the United States. Each network was based on custom technology, making it difficult to exchange data between users working on different networks. For this reason, around 1970 the ARPA project started a working group on internetworks, in which multiple separate networks could be joined into a network of networks. The research produced various protocols such as the Internet Protocol Suite.

In the early 1980s the Internet Protocol Suite was adopted internationally on existing networks, while ISPs began to emerge few years later: the Internet as we know it today was born. Since then, the whole network started to grow very quickly: the OPTE project is an attempt to map the entire physical Internet, to see how it exactly looks like. They have created a very cool video that shows how the network has evolved from 1997 to 2021:

Who owns the Internet?

Nobody does: the Internet operates without a central governing body. However, there are multiple organizations that establish the Internet's structure and how it works, but they don't have any ownership over the Internet itself. The most important ones:

Lots of services are based on the Internet infrastructure. The most popular one is probably the World Wide Web (WWW) or web in short: a collection of text documents and resources (pictures, videos, ...) accessible over the Internet. The article you are reading right now belongs to the web: it takes an Internet connection, of course, and a web browser, a piece of software for accessing documents on the web and displaying them to the user. Web documents and resources are stored in special computers connected to the Internet called web servers.

The World Wide Web is based on the Hypertext Transfer Protocol (HTTP), which is part of the Internet Protocol Suite. The HTTP protocol determines how data should be sent from web servers to computers that want to access a specific document. I will cover the HTTP protocol and related technologies in future chapters of this series.

The e-mail is another popular Internet application: a method of exchanging messages between people using electronic devices. Millions of people use it every day, many of whom have replaced it for physical letters or telephone calls. The e-mail system runs on special computers called e-mail severs and is based on several protocols: the Simple Mail Transfer Protocol (SMTP) for moving messages around, the Post Office Protocol (POP) and the Internet Message Access Protocol (IMAP) for retrieving e-mails from e-mail servers to users' computers.

In this episode I wanted to take a shallow look at the Internet infrastructure, especially the tangible side of it. In the next one I will get more technical by dissecting the Internet Protocol Suite and see how it gives actual life to the Internet we use today. Stay tuned!